The Dutch and Easter Island 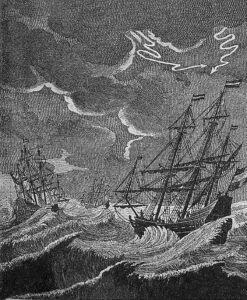 In the late seventeenth and early eighteenth centuries, the Pacific was still an ocean that Europeans had barely sailed, let alone charted. Mariners explored the South Pacific in hopes of finding the long-sought southern continent. The Dutch geographer Arent Roggeveen (father of the future explorer) was determined to prove its existence, and in 1676 he obtained permission from the States General (the national assembly) to organize an expedition for this purpose. Although the Dutch West India Company (WIC) did not object to his plan, nothing ever came of it. Not only did Roggeveen fail to raise the necessary funds, but his health deteriorated.

The permission expired, and Arent Roggeveen died in 1679 before he could embark on his adventure. His son Jacob had no desire to travel, despite two periods of service in the Dutch East Indies, the second as a member of the Court of Justice, the highest legal body of the Dutch East India Company (VOC) in Asia. After returning to the Netherlands in 1714, he established a respected law practice in Middelburg, but was subsequently embroiled in religious disputes which became so heated that he was banished from the city. This might be one reason why, at the age of sixty-two, he set out to make his father’s dream come true. In 1721, he petitioned the Heren X , the governing board of the WIC, and was given its authorization to go in search of that ‘unknown southern continent’, Terra Australis Incognita.

In July 1721, Jacob Roggeveen set sail from the island of Texel with three ships: the Arend, the Thienhoven and the Africaansche Galey. To give a wide berth to the territory of the VOC, the ships sailed via South America. The western side of this continent belonged to the commercial territory of the WIC; the expansion of that territory to include the ‘great South Land’ would give them a big advantage over the VOC. These two Dutch trading companies, vying for supremacy on the other side of the world, thus provided ample evidence of the mercantile spirit and competitiveness that prevailed in the eighteenth century. The three Dutch ships rounded Cape Horn and sailed north up the west coast of South America before heading west. Weeks of nothing but water as far as the eye could see followed.

In the late afternoon of April 5th, 1722, Easter Sunday, crew members on board the Afrikaansche Galey sighted an island in the Pacific. The discovery was greeted with joy. Could this be the sandy island off the coast of the long-sought for Unknown Southland, mentioned by Edward Davis in 1687? They signalled it to the Arend and the Thienhoven, the other two ships of the Dutch Expedition, and Commander Jacob Roggeveen’s journal that day included the following passage: ‘and we named the land Easter Island, because we discovered and found it on Easter Sunday’.

Roggeveen and the crew of the two accompanying ships did not see the island until the next day. This explains why April 6th is often mentioned in travel reports. In the days that followed the Dutch approached the coast, saw that fires had been lit on the island, met a man from Easter Island who had managed to swim to one of their ships, and finally went ashore with 134 men on Friday, April 10th.

Shortly after their landing, some sailors in the rear of the group panicked and fired on the islanders, killing ten to twelve inhabitants. Roggeveen and the other captains were angry, and the petty officer involved was called to account. Nevertheless, the expedition went ahead, and impressions of this island were recorded in official logs and travel accounts. The Dutch visit lasted only one day and at the end of that same day the three captains and three pilots concluded in a joint meeting, chaired by Roggeveen, that this island could not be the ‘sandy island’ mentioned in Davis’s travel accounts. Having navigated around the island just in case, they finally set sail again on the 13th of April, on a westerly course.

Roggeveen may have gained some notoriety for being the first European to set foot on the now legendary island, but his expedition could hardly be considered successful. In reality, his voyage, commissioned by the WIC, continued to yield misery and disaster. Not surprisingly, the expedition never found the Unknown Southland; instead, after a terrible voyage involving the shipwreck of the Afrikaansche Galey, the mutiny of five disappointed sailors, the loss of a great many crew members due to malnutrition and diseases, the expedition reached the archipelago of the then Dutch East Indies, present-day Indonesia.

Here, the two remaining vessels were seized by the authorities of the VOC on charges of ‘transgressing the limits’, meaning: illegal trading in VOC-territory. Even though they were fellow Dutchmen, the VOC took the matter seriously: Roggeveen and the other captains had to hand in their logs and other documents, and the ships were confiscated and sold. After an enforced stay of several months in Batavia (present-day Jakarta), Roggeveen returned to the Netherlands aboard a VOC ship, a disillusioned man.