Which name to use? 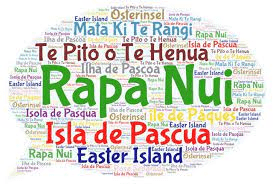 When the Dutch visited the island and called it Easter Island, it turned out that it had been inhabited by Polynesians for a long time. The Spanish tried in 1770 to rename the Island San Carlos, honouring their King, but that failed to get international recognition. When the first settlers arrived is still a matter of debate. Most researchers think it was around 1100 AD.

Did they then give a name to the (entire) island? James Cook was given the name ‘Waihu’ during his visit in 1774, but that was probably only the name of a region on the island. In any case, it is certain that the names Rapa Nui and Te Pito ‘o Te Henua (‘The End of the Land’ or ‘The navel of the World’) are of a later date.

Steven Roger Fischer tells the following about this in his Island at the End of the World (2005, 91): “In December 1862 the Peruvian schooner Cora had taken several Easter Islanders, among them Mau Rata’s son Manu Rangi (‘Heavenly Bird’) – the next atariki or ‘heir apparent’, who was then about eight years of age – and had then sailed to Rapa in the Australs to recruit more ‘immigrants’.

But the Rapans had seized the Cora and sailed in her to Tahiti. Under way, Manu rangi and the other Easter Islanders had apparently compared geographical notes with their Rapan saviours and hosts, thereby discovering that Rapa (‘Extremity’) was indeed only Rapa ‘Iti (‘Lesser Extremity’), whereas Easter Island was Rapa Nui (‘Greater Extremity’ / ‘Lands’ End’).

The name being incomprehensible as such in the Easter Island language, it was simultaneously translated into this as Te Pito ‘o te Henua (‘The End of the Land’). Whereupon Manu Rangi’s mana, as heir, ensured that the new Polynesian name ‘Rapa Nui’ was adopted by all Easter Islanders once the young atariki returned to the island in January 1864, on the same vessel bringing the first missionary. In writing the name first appears as ‘Rapa-nui’ in the 1863 handwritten memoirs of Father Honoré Laval of Mangareva. The new name of Rapa Nui fittingly defined both place and the fate of Easter Islanders in the new Polynesia that was then emerging.”

When the island came under Chilean reign in 1888, the new rulers tended to use the Spanish translation of the Dutch name: Isla de Pasqua.